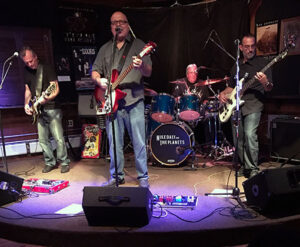 The band’s debut 4-song EP, “The Cosmic Adventures of ManBoy,” was released internationally in August 2010. The Aquarian Weekly selected the EP as its “Disc of The Week” on January 13, 2011.

Recording of what was to be a full-length follow-up began in early 2011, during which the band made sporadic live appearances. They made their live debut opening for The Smithereens at Pat Dinizio’s 5th Annual Memorial Day BBQ/Fan Jam in Scotch Plains, New Jersey on May 29, 2011. The band also performed at Soul Kitchen Music Hall in Mobile, Alabama (July 2011) and Maxwell’s in Hoboken, New Jersey (November 2011).

In December 2011, the band released a single, “Kill A Clown (No, Not Really),” in response to the positive reception the song received at their live shows. “Kill A Clown” received airplay from DJ Rich Russo on his “Anything Anything” program on WXPK-FM “The Peak” in New York and WDHA-FM in New Jersey. Russo had asked for a recording of the song after hearing the band perform it at Maxwell’s in Hoboken.

Three online singles were released worldwide by Mike Daly & The Planets in 2016 and 2017: “Never Too Late,” “Hero’s Trial,” and “Salvation.” All three songs were subsequently included on the band’s selft-titled album, released in 2017.

In 2018, the the band released a second full-length LP, “All It Takes Is One,” in digital, CD and vinyl formats. The release was primarily funded via a Kickstarter campaign the previous year.

Two more singles were issued in 2020: “This Is My Life” and “Falling Out Of Love Song.” The latter was released by Big Stir Records as part of its digital singles program. The B side, “Star,” was taken from “All It Takes Is One.”

The band was also selected for the fourth consecutive year to perform in November 2019 at the New York segment of the International Pop Overthrow Festival.